So last week I decided that I’d quite like a trip away this weekend. At first, I wondered about Camber Sands but the weather forecast put me right off that idea. I’m not sure that I’ve ever been to Camber so I thought it might be fun. Anyway, we didn’t go there. By ‘we’ I mean, my Girlfriend Nicky, good ol’ pal Chris and his new partner Monya, who I’d not met before, and I. 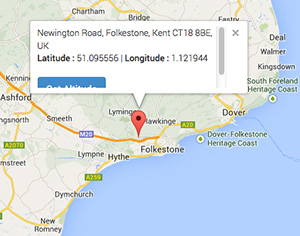 Instead we decided to go to Boulogne-Sur-Mer in France. Why? Simply put, because I didn’t want to drive mega miles for a relaxing weekend away but I did quite fancy trying out the EuroTunnel or ‘le shuttle’ if you like. Life’s about new experiences after all and I wanted a practice run as we’re hoping to do a European Road Trip in the Summer.

Here came my first gripe, amongst a few. On the paperwork for le-shuttle were co-ordinates for the folkestone crossing. The coordinates read:

So we used these coordinates to find the EuroTunnel, you can’t be more accurate than GPS coordinates after all, right? These coordinates are WRONG. My Tom Tom Sat Nav believed they were wrong and a quick check on gps-coordinates.net also confirms this.

These coordinates actually take you to 6 miles away from where you need to go. 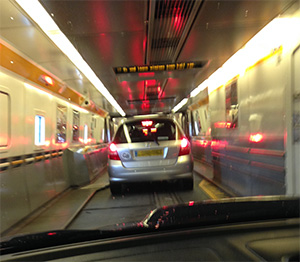 This, and slow moving lorries meant that we were now going to get to the crossing at 10:30 and check-in was to close at 10:20. I was hoping that the check-in time on the paperwork was as accurate as the coordinates were and preparing for an argument of some description about why we were late but should still be allowed to board. Luckily, none of that stress was needed because the EuroTunnel was running 30 minutes late anyway so we checked in with no problems, hallelujah! I have to say, I quite liked the EuroTunnel, it was efficient, easy, quick and the train was actually cleaner than the last normal train I’d been on which I find odd considering how dirty fuel is according to environmentalists.

The road connections once in France are far superior to those in the UK, and the roads were smoother too. The weather at this time of the year was a similar temperature but the sunshine made it feel warmer so that was good.

After a lot of discussion last week about which Hotel to stop in we’d finally decided on the Opal’inn. The reasoning behind this was that it was quite close to Boulogne town centre, had a sea-view, had free parking, was rated with an extra star to some others, and seemed worthy of the £75 per night per room that it was advertised at on booking.com. 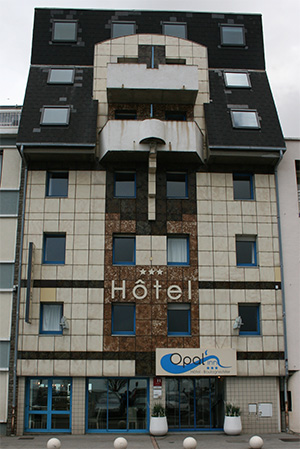 My first impression of the Opal’inn as we walked towards it was that it looked a little run down, but I reminded myself that ‘you should never judge a book by its cover’ and hoped that it would be a lot better on the inside. It was, thankfully. The receptionist was okay and it all seemed clean. We got room number 52 which was the room next to the lift on the 5th floor. This is where things started to become a little less ideal. Nicky is one of the lightest sleepers in the history of the world, a lift next to our room was an absolute guarantee that sleep would be minimal that night. We were also a little unimpressed by the stained bed-sheet. This was reported and rectified very quickly. It wasn’t all doom-and-gloom because the view out of the window was pretty good, although not as picturesque as I’d imagined before we got there it was about as good as a view was going to get of Boulogne-Sur-Mer. I took a panoramic photo using my iPhone so whilst the car park looks a slightly funny shape, you get the idea. We dumped our stuff in the rooms and then went on the hunt for some lunch. It was around 2:30pm at this point. We went into the town centre and looked at menus outside probably every restaurant in the whole of the town centre. After deciding to go and eat in 3 of them and being told that they were closed despite them being open we realised that we actually had very little choice in where we would be eating lunch after all. Eating at 3pm mustn’t be normal in France, who knew!? We found a restaurant that advertised non-stop service and eat there. The Le Welsh Pub to be precise. The food was good but OH MY was it pricey (for lunch)! There was 130 Euros smashed through straight away. Am I tight or is £27 per head for lunch a little on the high side? Anyway, I got over it as I was on holiday. We had a walk around the town, the weather was fair although quite cold (about 7°C). We found Le Chuck Wagon, a Fren-Mexican bar and grill which was quite cool so had a swift half in there. I wish I’d taken a few more snaps because the decor was quite cool, the bar taps had guns instead of handles and we sat on bar stools that were horse-saddles. I suppose it was worth the £5 per drink then. People complain that things are expensive in England, I suggest they actually stop moaning and go travelling a little. We discovered that the French don’t know what a ‘Latte’ is despite google translate confirming that the translation for latte is in fact latte. If you ask for a latte, you get a black coffee with a pot of milk. I’d consider this a white coffee at best, never mind. I tried a fruit beer, it was okay. 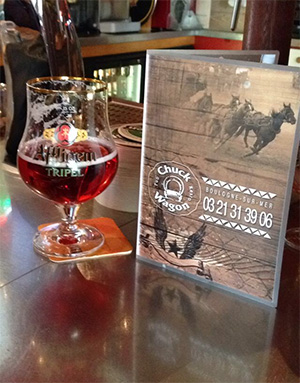 We got back to the hotel and I hit the roof! It appeared that whichever member of staff had changed the bed cover had also taken a dump in the toilet and not even bothered to flush it! Gross! Disgusting! Shocking! I did the very British thing of flushing it and making a mental note to make reception aware of my disgust on check-out.

I had a half an hour kip as the TV was all in French and then got ready for dinner. We’d had a look at a few restaurants for dinner before we all decided on one that the girls liked. Again, this was an expensive ordeal, about the same as lunch from memory. I wasn’t allowed a starter because a plain salad wasn’t on the starters list only on a combo deal, this was rectified with a little nagging. The options for starters were mussels, mussels, mussels, calamari or mussels. So I read that as no, no, no, no and no. My salad which was literally one tomato sliced and some plain lettuce leaves was charged at €6, £5! I opted for a beef burger for my main. Listen up France, a burger in a bun is supposed to have bread on the top and the bottom. To have cheese on top of a hash brown on top of a burger on top of cheese on top of a hash brown on top of a burger is not only, not a burger in a bun but it’s also annoying if you’re not particularly fond of hash browns and you’re paying £15 for the privilege! I had chocolate mousse for dessert, I’d given up on looking at the prices by this point but I wouldn’t be surprised if it cost a tenner.

We went back to the hotel and discovered that the hotel bar was the cheapest place to drink in town. By this point I was so tired that it was kind of irrelevant, all I wanted was sleep. Nicky felt the same so we went up, party animals Chris and Monya stayed in the bar. We went to sleep, I slept like a log despite the mattress being as soft as a marshmallow and the pillows about as thick as post-it notes. Nicky slept a little bit, as predicted.

The following morning I woke up to discover that there was a load more faeces in the toilet! Neither Nicky or I had done this so I was a little bit spooked, had someone come in during the night just to use the toilet? The mystery was solved shortly after as whilst Nicky was cleaning her teeth we heard the toilet above flush. Low-and-behold, our toilet was full of crap again! Classy! This was reported to reception on the way out and the receptionist gave us the whole ‘oh, this is the first time this has been reported’ routine; however her body language and facial expression suggested that she might not have been telling the whole truth. Either way, it was gross and I won’t be stopping there again in a hurry. The other rooms might be fine but if you get offered room 52, ask for a switch. Room 32 is okay according to Chris and Monya, although that is also by the lift.

On the Sunday, we decided to visit Nausicaa. I wasn’t too fussed about this as I’m of the belief that once you’ve been to one-or-two aquariums you’ve seen them all. However, the girls fancied it and it seems that hardly anything is open on Sundays in Boulogne anyway. At around 12 noon we began our journey back to the EuroTunnel. We decided to take the coastal road instead of the motorways, and this is definitely the route I’d recommend if you like nice views or awesome driving roads. I like both so I was happy. We had a brief stop-off in Wimereux on the way, where there were cheese shops, patisseries, wine shops, chocolatiers, cheese and wine shops and a few estate agents. Not much else. Nice little place.

At the channel tunnel French passport control waved us through without looking at our passports presumably because we had a GB license plate. We were then pulled over so that a sniffer dog could check the car for drugs. This made impatient Nicky very stressed; it meant that we would be further back in the queue for the tunnel. End of the world. We followed an AMG ML63 onto the channel tunnel train; that was a very nice car to be parked behind, yum, and then we travelled home via the Harvester; a great way to finish the weekend in my eyes.

All-in-all I enjoyed the weekend and I’m looking forward to our European Road Trip in the Summer more than ever!